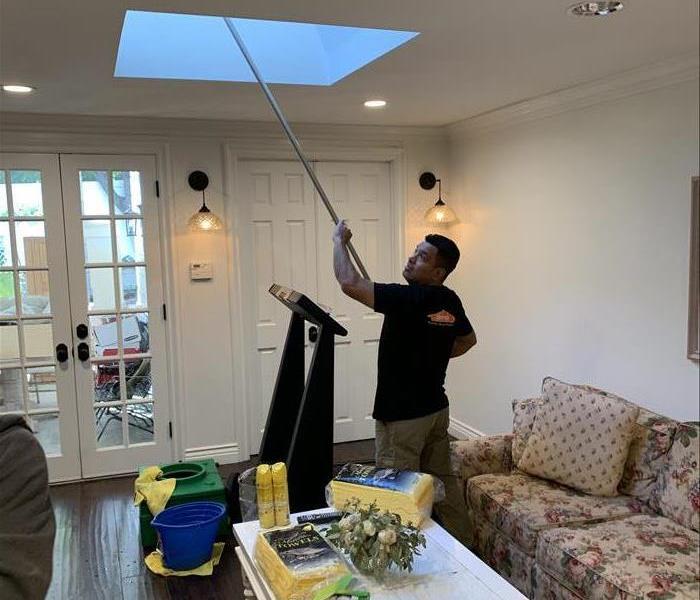 To mitigate smoke and soot damage to your home (and the people in it), call SERVPRO of North Hollywood. We're faster to any size disaster.

With wildfires burning across California, now is a good time to explain how such fires affect Los Angeles property owners even when their home or business is not directly threatened by the flames.

Besides heat, wildfires spew all sorts of stuff into the atmosphere. What those chemicals are, and how harmful they can be, depends on the fuel being burned as well as the duration of the fire.

Every fire, no matter the cause, releases carbon monoxide (CO) into the air. While we often associate the chemicals from a fire with the smell of the smoke, carbon monoxide is actually odorless. Indeed, it doesn't necessarily require an open flame to produce CO, as even contained fires, such as those in our ovens, cars and heaters, also release the chemical.

Carbon monoxide is toxic to humans and animals and exposure symptoms include headaches and dizziness, nausea and vomiting and weakness and disorientation. Anyone exhibiting such symptoms should move away from the source immediately to fresh air and be examined and treated by a medical professional.

To avoid CO poisoning, be sure to have carbon monoxide detectors installed in your home or commercial property. Test and install new batteries regularly and replace older units with newer models every five years or so. You should also have your heating system, water heater and any gas or oil burning appliances serviced annually.

As mentioned, we most often first notice a fire by smelling smoke. But the smoke released by a fire can include a wide array of chemicals depending upon what's burning. The smoke from trees, brush and untreated wood includes a mix of benzene, formaldehyde and acrolein, among others. Smoke from painted or stained wood will also release chemicals from the coating, potentially including neurotoxins like lead or mercury.

But the biggest health concern comes from fine particulate matter, a form of air pollution that is often visible during a wildfire as haze. When air quality warnings are in effect, fine particulates are often the culprit as they can cause mild to severe breathing difficulties, even with just short-term exposure.

When the air quality is poor due to a fire, stay indoors and limit the use of HVAC systems, such as air conditioners, which can draw fine particulates indoors through the ventilation ducts.

While often paired together, smoke and soot are actually two separate but related fire outputs. Smoke is comprised of the visible gases released by the fuel burned in a fire, while soot is comprised of solid carbon particles that have escaped the fire itself, resulting in black, brown or grey colored dust. However, soot is light enough to float in the air and can also be inhaled, causing respiratory distress and illnesses.

Long-term, if not properly cleaned, soot can also damage solid objects, including walls, ceilings and floors, roofing, window and door frames, decks and patios. Soot is acidic and can therefore also be corrosive, meaning that over time it can "eat away" at a surface, causing discoloration and pock marks.

The Importance of Professional Fire Cleanup

Ultimately, wildfires present a number of dangers to property owners across Los Angeles, even when the flames are miles away. Following a fire, for the safety of everyone entering the space, it is important to have the fire restoration specialists at SERVPRO of North Hollywood help you thoroughly clean your property.

Whether you own a home, apartment, office, store, hotel or restaurant, we have the highly-trained restoration team and advanced cleaning technology to completely and properly cleanse your location of smoke, soot and other chemicals to protect both your property and the people in it.